THE HISTORY OF HANOVER 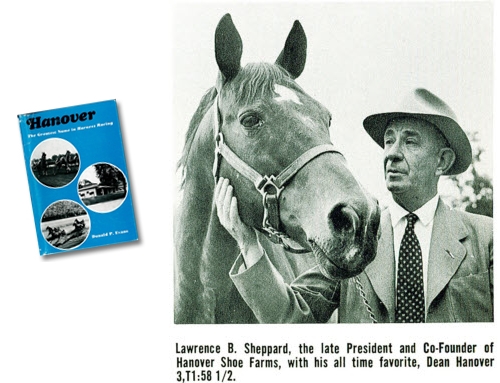 Since the USTA began compiling breeder's statistics, Hanover Shoe Farms has led the annual money-earnings totals every year. The famous Pennsylvania nursery has been a world class breeding establishment for nearly three-quarters of a century. Hanover sires have also produced a multitude of winners of harness racing's most prestigious events such as the Hambletonian, Kentucky Futurity, Little Brown Jug and Breeders Crown.

In the early 1900's Lawrence B. Sheppard, then in his twenties and a junior partner in the Hanover Shoe Company, supplied the drive and vision to transform the Hanover Shoe Stables into Hanover Shoe Farms. This transformation began in 1922 when Sheppard began replacing the modest, mediocre stock with some of the finest racehorse of the era, with Baron Worthy and Peter Manning among them. But it was in 1926, when Lawrence Sheppard boldly bought a 69-horse package from the estate of A.B. Coxe, that Hanover truly burst upon the national scene.

For the next 42 years, young Sheppard was determined to keep Hanover as "The greatest name in harness racing." He got no argument from the woman he married, a San Antonio belle named Charlotte Cassin Newton, who shared his great love of horses. And his constant quest for excellence caused him to select John F. Simpson, a successful young horseman, as his ultimate successor at the helm of Hanover Shoe Farms. The history of any breeding farm is a chronicle of its stallions. Hanover has historically been home to many of the sport's most prolific sires. From the early years of harness racing's first Hambletonian winner Guy McKinney and the world champions Dean Hanover and Billy Direct; to the post World War II era of Star's Pride, Adios and Tar Heel; to the late 70s, 80s and early 90s with Super Bowl and Albatross.

With Tar Heel and Star's Pride under the Hanover roof, Sheppard possessed awesome breeding power at both gaits, but he still wasn't satisfied. John Simpson had convinced him that Hanover needed Adios, Delvin Miller's dazzling, young Hal Dale son, and he set out to land him. The price was steep-the steepest ever at $500,000-but Sheppard raised those funds by selling one-third interests back to Miller and to fellow Pennsylvania breeder, Max Hempt.

In 1972, Simpson and Hanover added another pair of sparkling prospects which turned out to be "the franchise" for two decades-trotter Super Bowl and pacer Albatross.

Keeping Hanover Shoe Farms above all rivals has meant considerably more than merely adding a stallion or two every couple of years. Broodmares were crucial to the breeding game as well, and no one knew that better than Simpson. Lawrence Sheppard was always game enough to pay princely sums for promising sires, but never grew accustomed to meeting the steadily rising prices affixed to well-bred mares. He paid the big price when he had to, but he growled about it every time.

John Simpson never strayed from his avowed goal of maintaining the Hanover broodmare flock as the best in the world, whatever the cost. "No breeding farm is going to reach the top, or remain on top, unless it consistently strives to improve its band of mares," said Simpson. It has cost Hanover millions of dollars to continue its edge in the broodmare derby, but it's been well worth the price. In recent years this has never been more apparent- Hanover Shoe Farms has reinvested $16,650,500 in the purchase of young, championship-caliber broodmares over the last ten years.

The Hanover tradition was set a long time ago with strong leaders like John F. Simpson and Paul Spears. The new and talented young leadership of Jim Simpson (son of John F. Simpson) and Russell Williams (grandson of Lawrence Sheppard) continues to steer Hanover Shoe Farms into the next century.

In 2001 Hanover’s veteran pacing stallions, No Nukes and Big Towner, ranked first and second on the all-time earnings list among active pacing sires with career progeny earnings over $109 million and $105 million respectively. No Nukes was also North America’s leading broodmare sire in 2000 with all age earners of over $20 million and 2 & 3 year old earners of nearly $12 million. Big Towner took top honors as the sport’s leading living sire of $100,000 plus winners with 300 in that category.

In 2006, Western Hanover and sons The Panderosa and Western Ideal were a dominant force among Leading Money Winning Pacing Sires ranking in the top 5 for three year old earnings. Western Hanover was second among All Age Pacers by 2006 earnings with $12,894,450 and second in Leading Pacing Sires of two year olds by average earnings (Western Ideal was ranked 4th in the same category). Western Ideal and The Panderosa were ranked 2nd and 3rd respectively among three year old pacing sires by average earnings.

Hanover was built on love and dedication-Lawrence Sheppard's everlasting love of the Standardbred horse and his unwavering dedication to the art of improving the breed. As things have changed throughout the years, these things have remained foremost at Hanover Shoe Farms.